The History Of My Hair

Mine started long and got shorter. I was the typical little girl (well, sort of. I was odd then as now, but that’s beside the point.) My hair went from newborn short to progressively longer. Then the battle of the brush began.

I would have to be cajoled into having my hair brushed or I looked like Medusa. “Do you want to go to school looking like Medusa?” my mother said. I didn’t know who Medusa was but I did know that we must have had a lot in common—the tangle.

The tangle was a mystery to both me and my mother. Between brushings the tangle would grow around the nape of my neck into a snarled knot of ever-growing proportions until the next morning when my mother would attempt to de-snarl it. That’s when the screams and tears reminiscent of the medieval torture chamber began. I wailed. My mother screamed. She hated it as much as I did.

Having conceded defeat, my mother took me to the hairdresser who gave me a shag. I loved my shag. It was short and tangle free. It was a success. I could care for my own hair. My shortened locks required minimum brushing. It was heaven.

Then middle school came and the shag went out of style. I tried for shoulder-length hair. The bangs became the problem then. Keeping the bangs out of my eyes was the new hair battle. My hair is an over-achiever. The minute it gets cut it grows like a field of alfalfa in Spring. By the time I walk out of the salon and to the car it has already grown two inches.

I took to trimming my own bangs. They always ended up crooked.  I would keep cutting in an effort to straighten them up. However, that only made them short and crooked. For the entire 7th grade I had to keep my head at an angle so it gave the illusion that my bangs were straight. See class photo below.

Then Farrah Fawcett came along in high school. I had to get up early to style my hair because it required, hot rollers, a curling iron and lots of hair spray. I did a great job on the front. I couldn’t see the back so for three years I had a bed head and never knew it.

The next adult hair cut was the perm. I decided I wanted what I didn’t have—curly hair. So, I bought it. I looked like Orphan Annie. The perm lasted a couple of years until I fell in love with a girl and had to choose from one of the 1980’s lesbian hairdos. I had seven choices. I chose the mullet—short on top, but keeping the long hair in back as some sort of concession to ‘I’m still a girl but I like girls now.’ I freely admit it was a confusing time for me.

Once I became more secure in my sexuality and a tad militant while in college—all that woman-power-anti-patriarch stuff. I read Mary Daly Gyn-Ecology and even went to one of her readings— I took to shaving the sides of my hair right down to the skin and looking rather dangerous with a pony tail in the back. I resembled some sort of other worldly nymph sprite creature.

It was my attempt at creating my own unique hair style. I couldn’t get a stylist to do my design—something about professionalism. I had my girlfriend cut my hair. I kept this hairdo until I went to London and was labeled a hair Nazi.

Next came the flat-top. I went to Luigi’s Hair Salon and had him cut the ponytail off and create a full on flat top. The only concern I had with Luigi was that he wore grease-smeared, coke-bottle lenses and I couldn’t be sure if the flat top was truly flat with any precision. 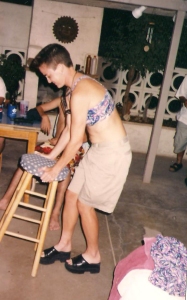 My girlfriend wasn’t certain she liked this new hairdo.  I also got called “young man” a lot. There was also another problem—ladies often thought I was in the wrong bathroom.

The flat top evolved into the shingle cut. It was like I had a sloping roof on one side while the other side lay sedately down. This ‘do lasted a few years until I got sick of swinging the longer side out of my eyes and the chiropractor couldn’t figure out why I had so much trouble with my neck.

At last the hairdo that fitted me best came along. It came about as a combination of two stylists. One was a woman who talked about clubbing in Phoenix so long that I came out with almost no hair. People at work were startled and gave me the names and numbers of their hairdressers. This ended up with me in a black barber shop where this wonderful old barber did his best even though he had never cut a white person’s hair. I really owe it to him. I came out with a modified flat top with a bit of a twist and the spike was born.

Now I was the hip spiky girl. If someone didn’t know my name at work they did a hand gesture which involved wagging all five fingers at the top of their head, saying, “You know the girl with the spiky hair.” My hair became my signature. Michael Jackson had his glove; Madonna had her pointy bra; I had my hair. Even when I went to a writer’s conference people knew who I was because of my hair. My hair even made people I didn’t know think they knew me. It was remarkable. I’ve kept it ever since.

It only took me 45 years to find the perfect hairdo.  It’ll go grey and I’ll add a pink or purple highlight and be forever happy. Oh, and I haven’t owned a brush in years because my fingers with the aid of gel does the job. Every day my hair is a bit different— like a mercurial being with its own identity.

And then sometimes I just wear a hat.

Making the world a happier place—one book at a time! 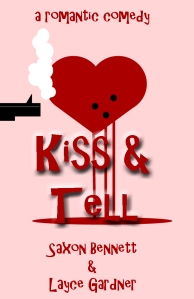