“What’s that little pointy thing?” Emma said, leaning over my shoulder and looking at the computer screen.

“I think it’s fairly obvious,” I replied. “My friend Alice and I painted it on a billboard. It was advertisement for a mattress company.”

“Isn’t that against the law?” Emma said. “I think it’s called defacing public property and isn’t that breaking that Social Contract you’re always telling me about?”

The older she gets the smarter she gets and the more I am forced to confront my misspent youth. I was a nefarious graffiti artist. I can confess now because I’m pretty sure the Statue of Limitations has run out. I was, after all, only eighteen at the time.

My friend Alice and I were The Outlaws. We graffitied sayings we found in Tom Robbin’s books around town. Sometimes we improvised— as in the above mentioned photograph. We found social statements and commented on them. We actually were kind of famous… at least with billboard companies, the Parks Department and private industries. We were also underground. We admitted our activities to no one. 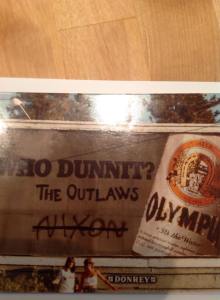 One day, my mother and I were walking down the street when we came upon a large example of our work. “Will you look at that? They misspelled tequila. Well, at least I know it wasn’t you. You’re an excellent speller.”

I nodded and kept my mouth shut. She continued, “Speaking of graffiti, did you see what someone did to that mattress company, the Sleeping Giant? Why they painted an erect penis on it is beyond me.”

“That’s a horrible thing to do,” I said.

“And Francis said there was a saying on the park wall. It was enormous.”

“Something about the Outlaw being the can opener of life. What do you suppose that means?”

“Maybe they opened lots of cans of paint,” I offered. (Yes, that is me drinking a margarita.)

Now what really happened was we painted the asphalt of my street with the word Tequilla. When Alice studied it, she said, “Whoops. We misspelled Tequila.”

“Duh, I think we can blame it on the tequila,” I replied. We drank a lot of tequila in those days. We even ate the worm at the bottom. I told Alice just to think of it as a vitamin.

It would have lasted as long as the Civil War but we ran out of paint.

We only had one mishap.  We spilled a gallon of paint in my car and it took several hours with a wet dry vacuum and copious amounts of soap to return the floor boards to a semblance of normality.  The car reeked of paint for months afterwards.

As I told Emma those stories I realized that the world today is a much stricter place. Outlaws really are outlaws—only they do truly bad things. We just made people laugh and shake their heads. I must say I enjoyed my misspent youth and I’m glad I had my friend Alice to spend it with me.

Making the world a happier place—one book at a time!

Available for only $4.99 at Amazon, Smashwords, Barnes & Noble & Kobo!