I was making English muffins. The package had an oversized red rubber band to keep the package closed to ensure maximum freshness. So while I was waiting for my muffin to toast, I played The Rubber Band Game.

It goes like this–shoot the rubber band as far as you can. Now these oversized bands have long range capabilities as I discovered. I shot the first rubber band at the window. It struck with authority. The downside of the The Rubber Band game is that unless you have a well-trained toddler who is a proficient retriever you have to do it yourself. 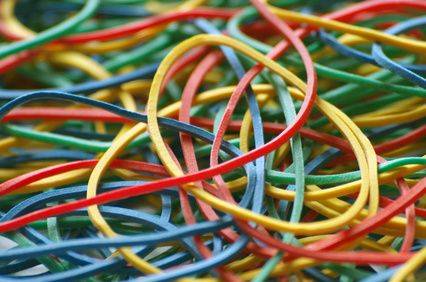 I solved the problem by getting out the bag of rubber bands. I’d do clean up once instead of going back and forth to get one. I fired away until…

“What are you doing?” Layce said. Now when a parent asks that question it starts out rhetorical unless what you’ve done is super bad. It is then followed by “What have you done?” This question may or may not be rhetorical. It’s usually a indictment of having committed a felony offence.

“It looks to me like you’re shooting extremely large rubber bands all over the house.”

“It’s an old school shooting game, you know, like before video games,” I said. I fired off another.

“You’d kill Emma if she was doing that. You’d say ‘What are you doing? You’re going to break something.'”

I’d noticed lately that Emma and I were lumped together a lot especially when it came to BAD behavior and Emma was not perpetrating the BAD behavior. She was used as a way to reform my behavior. Did this mean that I was the worst child in the house–the black sheep? It was suspiciously looking that way.

Layce had previously caught me bouncing a small plastic ball, the kind you get out of the gumball machine, while I was waiting for the coffee to brew.  She told me to stop because I was tearing off the popcorn ceiling stuff. She pointed to the white residue on the floor.

I always have to push the envelope so I did it  one last time because I’m a grown up and I have civil rights—unlike children.  That time Emma had come out of her room and said, “What are you doing?”

My infraction was revealed and followed by an eye roll. The rubber bands were different. I wasn’t damaging anything.

“I’m going to pick them up. I realize I’m not wearing safety goggles but other than that I am a certified rubber band shooter. If you recall I used to work for the post office and every postal person worth their salt is an expert at the firing of rubber bands.”

“I don’t care if you had a license. You need to cease and desist.” Layce glared at me with her I-am-serious-look usually reserved for Emma.

I looked at her defiantly and fired off one more, which wasn’t usually that big of a deal. She’d let out a huff and move on. But this time I was off the mark which usually wasn’t bad—unless you hit the Christmas tree.

Now in my defense I did not knock it over. What I did do was send a few ornaments flying off. I will admit that there was some damage. Layce didn’t take highly to my suggestion that if she was that concerned she should call the home insurance company and report me. Instead she took my rubber bands away and handed me the broom.

Emma came out of her room and said, “What’d she do this time?”

Layce held up the rubber bands. “She hit the tree.”

I kept my mouth shut and swept up the broken shards of Christmas ornaments.

Emma opened the microwave and exclaimed, “Why is there a melted crayon in here?”

Layce glared at me. “What have you done?”