THINGS I DO WHEN I’M SCARED

I usually have loads of ideas for blogs and I like them to be funny. I enjoy making people laugh. However, since this horror of an election began I haven’t felt very funny. I’ve felt stressed, sleepless, and when I do manage to sleep, I have nightmares. Mr. Ulcer has been having a party, complete with party favors, in my tummy. I’m glued to social media, news articles, and editorials. That creates fodder for my imagination. The problem with being a stressed-out writer is that I create scenarios, mostly bad, of what kind of a world we might end up living in. Believe me, it’s frightening. I wouldn’t put these stories to paper. They’d be too terrible.

So what do I do when I’m scared? I clean and straighten—I don’t know how much more vacuuming the carpet can take. I dust every conceivable surface in the house every day. The dust doesn’t have time to settle before I swish it away. I’d purchased dusting gloves, two pairs in case they stopped making them, to aide in my dust obsession. 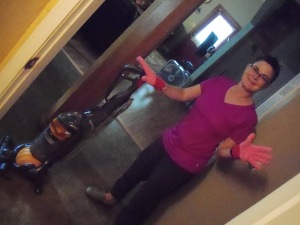 I straightened every cupboard in the house. I organized my T-shirts according to color. Next came the sock and underwear drawers.  Layce observed all this but didn’t say anything until she found me in the attic. It was the only area in the house left untouched.

Layce heard me shop-vacuuming the attic after I’d organized and labeled every box and then stacked them neatly according to use. I put all holiday stuff in one section, and Emma’s moving out stuff in another section, which mostly entailed odd kitchen devices like a hotdog bun toaster, tax records and extra furniture. Layce knew she had to put a stop to it.

“It’s fine. It will all be fine,” she said pulling me out of the attic. “You have to stop this.”

“You don’t understand, I can’t.  We have three days left before we get to stay in a kind American or have to run for the border. See this bag right here,” I lifted a knap sack.

“It’s our family bug-out bag in case we have to make a run for it. You do realize that the powers that be always get rid of the writers, artists, intellectuals and activists—never mind being gay—we’re in the double jeopardy category first.”

“Aren’t we going to wait and see how things turn out?”

“We’ve already voted. I’m taking you to an undisclosed location with no WiFi. We’ll stay in a cabin in the woods and go for long hikes and you’ll be so exhausted that you’ll sleep. We’ll eat peanut butter and jelly sandwiches, your tummy can handle that, and drink loads of chamomile tea for your nerves. It’ll be perfect.”

That’s exactly what we did and it actually worked. We are back home now, one day before the election and I’m not as stressed.  I didn’t organize or clean the cabin. I slept dreamlessly and Mr. Ulcer went into hiding.  Tomorrow, I can feel it, the world will be a better place.  Please vote for a kind world where we all live in peace with love and respect. I know you’ll do the right thing.